When did getting buried near your favorite celebrity become a thing?

Myrna Shirey of the Fore-Kin Trails Genealogical Society in Montrose, Colorado will use her grant to purchase a large flatbed scanner for digitizing a variety of records - to include funeral home books, newspaper obituaries, and club logs - of the Montrose area. The society funds the Montrose Genealogy Center that is free to the public and is completely funded by donations and product sales resulting from preservation work.

Total respect! 89 year old veteran, told by care home he couldn't go to Normandy, went AWOL and has been found at D-Day celebrations in France.

Badass WWII Veteran Jumps Out Of A Plane To Commemorate D-Day Anniversary
What do Valerie Jarrett and Valerie Bertinelli have in common? Genealogy on TV: 28 Celebrities and Counting 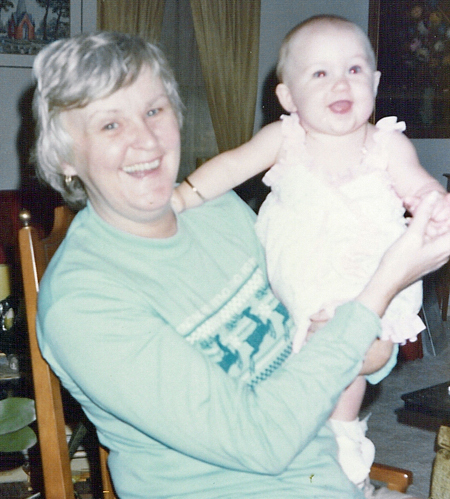 Mom with her first grandchild, Lindsay

Today would have been my mother's birthday, so as a small tribute, I've decided to share a piece I wrote just ten weeks after she passed away. Although it's been eight years now, the article still has practical value in terms of searching the SSDI, and selfishly, I wanted to share at least this small snippet of a remarkable woman. Happy Birthday, Mom.

I did something today that I’ve been dreading.  I finally got the courage to search for my mother’s name in the Social Security Death Index (SSDI).  And yes, she’s in there, although she only passed away about ten weeks ago.

It still doesn’t truly register.  I thought it would be a few more decades before Mom would appear in this resource that I use on a daily basis without any thought – without any thought of what it really means.  Each one of those millions of entries meant the world to someone.

There’s a part of me that’s convinced it’s someone else – especially because her entry is so full of red herrings.  Unless you actually knew her, her SSDI listing would send you off on a wild goose chase.  And for that reason, I thought it might make a good example of how we sometimes read too much into the details we find in the SSDI.

I realize it would make a much clearer example if I were to reproduce my mother’s SSDI listing here, but a cautionary voice in me hesitates to provide so much personal detail – especially since I’ll be dissecting it and providing additional information.  So I hope you’ll forgive me if I do this semi-anonymously.

To start with, there’s her name.  I wondered how she would be listed – whether the SSDI would include her under the first name she never actually used in life.  She was a Joisey girl, but had the Southern habit of going by her distinctive middle name.  Even in her business life, she used her first initial followed by her middle name.  But the SSDI doesn’t know any better, so she’s listed under a name that I don’t associate with her.

And then there’s the matter of her choice in her last name.  She was married twice, once to my father and again, just five years ago.  After my parents divorced several decades ago, she resumed use of her maiden name.  And when she remarried, she chose to retain that name.  So in spite of two marriages, she died with the same name she was born with – not especially common for women in their 60s, but a sign of things to come.

The SSDI listings usually provide a location for last residence and last benefit, and Mom’s is no exception.  We frequently use this as a proxy for place of death – and in many cases, it’s a good indication.

But in this case, these clues are misleading because my mother, like so many these days, was a snowbird.  She passed away in Florida, but you’d never know that from her entry.  If you were to try to obtain a copy of her death certificate, her entry would send you to a different and less genealogy-friendly state, so you’d struggle to even get a “not found” response.

And then there’s the matter of the state of issue.  Even I was surprised at this.  I had expected it to be New Jersey, the state of her birth and childhood, as well as her on-and-off again residence over the later years.  Instead, it was state where we had resided for a single year.

I come from a military family, so we bounced around a lot.  And for whatever reasons, Mom apparently had not applied for Social Security until she was in her mid-twenties and married with two kids.  I come from a generation where we applied for Social Security as youngsters, and now, most do it almost upon birth.  But Mom’s generation of women often waited until their first job.  So good luck to anyone who tried to seek her in the state of issue, where she hardly lived long enough to leave any trace.

To give you some sense of my mother, several who knew her best assured me that she was up there giving St. Peter a hard time.  As one wrote, “She was a powerhouse of a woman.  The world is unquestionably a better place for her saunter across the stage.  I’ll bet she’s even now demanding to see someone in charge and wondering aloud why this heaven place is not any better organized than it is, after all this time.”

She was her own woman, and in sense, she managed to outwit even the SSDI.  The portrait it provides is seemingly another woman – and oddly, I find that comforting.  I’m glad she’s almost hidden from view -- but just maybe, someone you’re seeking is, too, and you’re not so happy about that.  I hope this little piece will spark some thoughts to help you unearth that clever relative of yours who also managed to confound the SSDI.  Mom would like that.

I kind of like this idea - funerals for homes.

Delighted to be included in cover article of "American Spirit Magazine" re: orphan heirlooms!

Tribute to Those Who Are Still Coming Home from Vietnam, Korea, WWI/II

The Roots of Julian Castro

Links to articles about military genealogy and cases over the years

Carol Franks is on a personal mission to ensure that irreplaceable White County, Georgia documents are preserved. To this end, she creates digital copies of records found only in filing cabinets at the local library and will use her grant for an external hard drive with auto and cloud backup.