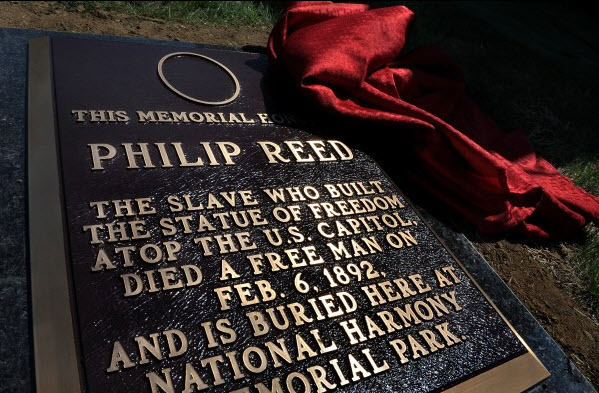 Back in 2009, I wrote about Philip Reed (note: most spell his name Reid, but I use the Reed spelling because that's the way he spelled it), the one-time slave who was responsible for placing the Statue of Freedom on top of the U.S. Capitol. Though others had researched him before, no one had followed his life after that point.

I looked into his later years, and among other things, discovered where he was buried.  Well, where he was buried the first time, the second time, and the third time. As I - with the help of my sister, Stacy - found out, Philip Reed was disinterred twice, and each time, taken a little further from his beloved Capitol.

I shared more of his story in chapter 15 of Hey, America, Your Roots Are Showing, and Andrew Carroll wrote about him in the closing chapter of Here Is Where.

Yesterday a memorial was installed at National Harmony Memorial Park, his final resting place, and I for one, am glad to see Philip Reed finally getting at least this modest recognition.